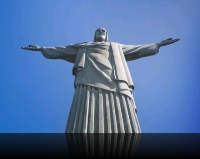 Rio de Janeiro is renowned for its festive atmosphere. Music and dancing are ever present in Rio, with Brazilians and international travellers flocking to Brazil's second largest city to partake in famous celebrations such as Carnaval. From Rio's white sandy beaches found at Copacabana and Ipanema, to the city's lush forests, it's easy to see why Rio de Janeiro has been the inspiration for many songs and dances.

Rio's tropical weather means the city can be rainy and humid. Rio de Janeiro's summer season lasts from December to March, where temperatures are hot and rains are more frequent. The best times to visit Rio would be in the winter when temperatures are moderately warm and perfect for lazing on Copacabana Beach.

The Rio Carnaval is one of the most famous celebrations in the world with its over the top costumes, parades, balls and samba competitions. Held annually four days before Ash Wednesday, the Brazilian Carnaval in Rio de Janeiro is one of the biggest and most spectacular in the country. The Sambadrome in downtown Rio is the epicentre of all the festivities and where local samba schools compete to best represent a theme in their floats, costumes and music.

Rio de Janeiro is well known for its nightlife, with many famous clubs attracting international celebrities. However, many places open later, giving you a great opportunity to explore and visit the local pubs, or botequins. Bars and clubs are plenty near popular tourist destinations like Copacabana and Ipanema, but for something more interesting, downtown Lapa is also worth a visit. In Lapa's bars and clubs you will find various kinds of music as well as live Brazilian music.

Football is also an integral part of the Brazilian culture. In Rio, you will find the world's largest football stadium, the Maracanã Football Stadium (Estádio do Maracanã). Enjoy the vibrancy of the stadium and its fans during a big game. The party atmosphere of Rio is also present here, with spectators arriving hours before the actual game to drink and dance to the familiar sounds of samba drums.

Christ the Redeemer is unmissable in Rio. As one of the largest statues of Jesus Christ in the world, the almost 40 metre tall statue looks over the city of Rio de Janeiro from the top of Corcovado Mountain in the Tijuca Forest National Park. Christ the Redeemer was also recognised as one of the New Seven Wonders of the World in 2007.

Just because you aren't in Rio during Carnaval doesn't mean you have to miss out on the festivities! Samba City offers visitors access to the best samba schools in Rio, where they can watch or even samba on the many dance table galleries.

Sugarloaf Mountain is visible from Guanabara Bay jutting out from the Atlantic Ocean. A cable car from the base to the peak, provides a breathtaking view of the mountain and Rio de Janeiro.

Made famous through song, Ipanema is one of the most expensive areas in Rio and is home to classy restaurants and shops. Ipanema Beach is a popular tourist destination, where you can surf, skate, bike and swim.

Tijuca Forest is the world's largest urban forest, which was planted by hand in the 19th century. Hundreds of unique and endangered species call the Tijuca Forest National Park home. Within the Tijuca Forest, popular visitor spots include the Cascatinha Waterfall, the Mayrink Chapel and its many lookouts and mesas.

Book your cheap flights to Rio today at Webjet!