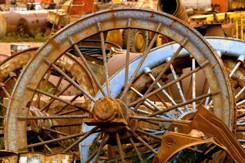 An hour's flight east from Perth, Kalgoorlie Boulder is the hub of the goldfields and one of Western Australia's largest cities. Still active as a mining town, Kalgoorlie Boulder's wide streets and grand old buildings are full of people living the prospecting dream.

Travel to the region by bus, train, plane or car. Kalgoorlie Boulder is a place like no other. From wild and heady origins as a frontier town where fortunes were sought, to the prosperous, bustling 'Kal' of today, Kalgoorlie's rich heritage permeates the town and gives it a distinctive character.

Turn of the century architecture, including the magnificent Boulder Town Hall, the red outback just beyond the settlement's streets and nearby ghost towns make this area fascinating to visitors.

Kalgoorlie Boulder is one of the most important mining areas in the world. After Paddy Hannan found gold in the area in 1893, the town's population soared to 30,000. Today the population is again up to 30,000, after the discovery of nickel deposits in the north of the goldfields.

The towns Kalgoorlie and Boulder amalgamated in 1989. Until then they were separate towns side by side. Boulder's main street, Burt Street, is five kilometres from Kalgoorlie's centre, Hannan Street. Boulder was named after The Great Boulder Mine, the first mine on the Golden Mile.

In September, renowned horse race the Boulder and Kalgoorlie Cup takes place at the 100 year old Racing Round. Crowds from all over the State come to enjoy the town's festive atmosphere.

The largest indoor pool in Western Australia, great for a cooling dip to escape the outback heat, is on Johnston Street.

The town has a number of pubs and nightclubs, and live music is popular around town. Visiting artists perform regularly at the Arts Centre.

Kalgoorlie Boulder offers the visitor a wide range of restaurants and cafes and a variety of cuisines. Chinese, vegetarian, and Italian foods are available as well as pub counter meals, fast foods and pizzas.

Compare and book cheap flights to Perth, Australia with Webjet and save.