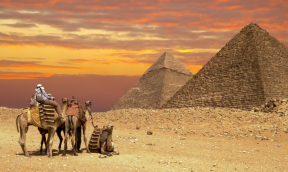 Cairo, the capital of Egypt, is steeped in history and culture. From its proximity to the Great Sphinx and the Giza pyramids, Cairo is a great base from which to explore the sites and sounds of Egypt. Travelling through Cairo, it is hard not to miss the dominance of Islamic architecture and has led to Cairo being nicknamed the "City of a Thousand Minarets".

Not only the largest city in Egypt, Cairo is also one of the largest cities in the Middle East or Africa. Get to know about the hustle and bustle of Cairo right here before you book your cheap flight with Webjet.

The population of Cairo includes people from many ethnic backgrounds. The majority of Cairo's population are Muslim but there are pockets of the city that are predominantly Christian. There is a strong Arab influence in Cairo from the food to the architecture, which is visible in any of the city's 500 mosques.

Cairo's restaurant scene has grown in recent years along with the city's growth as a tourist hotspot. You will find dishes to suit any palate from Lebanese, Turkish, Indian, Thai, Japanese, French and Italian, however, Cairo also has the best servings of Egyptian food in the country. Many Egyptians consider the national dish to be ful medames, a breakfast dish of mashed fava beans served with a boiled egg or Egyptian bread. However, when eating in Cairo, expect meals at later hours with lunch starting at 1 p.m. and dinner often starting at 9 p.m.

The Great Pyramid of Giza is one of the Seven Wonders of the Ancient World and is naturally a great tourist attraction. Located across the River Nile in Cairo's sister city, Giza, the pyramids in Giza a sight to behold and a definite must-see when travelling to Cairo.

Located adjacent to Cairo, the Great Sphinx of Giza, is one of the oldest and largest sculptures in the world. This 20 metre high statue of a lion with a man's head has been alluring tourists for many years with light shows staged in the evenings to keep them coming back. With a history as ancient as Egypt, the artifacts in the Egyptian Museum in Cairo are varied and many. The large amount of Egyptian antiquities on display include objects from Tutankamun's tomb, sarcophagi, jewellery and mummies.

Khan el-Khalili is a popular marketplace in Cairo for tourists and locals. Usually just referred to as "the Khan", here is where you can get a taste of medieval markets and haggle to get the best price on clothing, spices, jewellery, perfumes and more.

Bab Zuweila is a relic from Cairo's medieval past. Bab Zuweila functioned as the southern gate of a wall that was built around Cairo in 1092. A major landmark of Cairo, the Bab Zuweila gate features two twin minarets that are visible throughout the city.

Compare, book and save on cheap flights for business or pleasure to Cairo, Egypt.